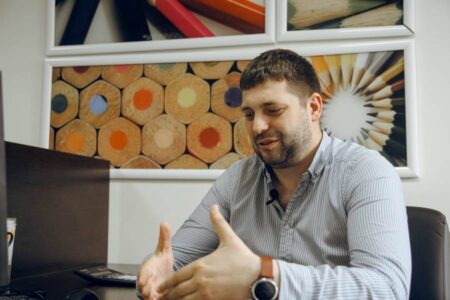 Each elevator company strives to provide the most comfortable service for its clients – depositors and traders. We are at G.R. Agro came to the conclusion that today it is not enough to improve only the technical part of the elevators. Digital transformation in agrоbusiness is not just a specific
project. Today, this is a synchronous movement towards a common goal, since agriculture is forced to change under the influence of external and internal factors. The first IT product of the company is a program that unites grain suppliers, elevators and buyers into one system.

How it will be, said the chief operating officer of G.R. Agro Artem Rempen:

How does the elevator program work?

“We have implemented an ERP system, within the framework of which a CRM / SRM system (customer and supplier relationship management, editor’s note) is being implemented, which works for both purchase and sale. At the same time, we have expanded the functionality of the system in such a way as to have full electronic contact with our customers. First of all, with suppliers, we will continue to implement it with buyers.”

Entering data into the accounting software (ERP-system) begins from the moment of negotiations with farmers. Thus, managers, understanding the situation with a particular supplier, are able to buy a certain amount of goods with all possible options for grain delivery – from the field, from the elevator, according to the census, and so on.

The CRM system that we are implementing at our elevators helps depositor keep track of all information about their grain – from the movement of the machine through the elevator to the amount of grain stored at the enterprise.

When a grain truck arrives at the G.R. Agro, after carrying out the basic analyzes, the laboratory enters the data into a single electronic system to which the supplier has access. Accordingly, the supplier online can track when the car entered the elevator, with what quality indicators the grain was, what was the gross and container of the car.

“In order to completely eliminate the influence of the human factor, we have also introduced a non-contact scanning system. The car, starting from registration at the elevator gate, goes through a total of 5 stages, where it is scanned, time is recorded, and some result of this action is recorded. For example, at the entrance, the time is set when the car got to the elevator, how long it stood in the queue. Further, samples were taken, respectively, you can track how much time has passed between the checkpoint and the laboratory. Received the analyses, knows how long the analysis lasted and saw the baseline indicators for the analyses, and so on.”

All this makes it possible for the farmer to control the entire process of passing the car with its grain through the elevator. In addition, the cargo owner gets the opportunity to control his own or hired employees, in particular drivers, which excludes the possibility of fraud on their part.

“If somewhere at some stage the supplier started to worry about something, for example, the analyses did not coincide with those that he did on his farm, or some problems with weight, then the farmer informs our manager about this. We can stop the car at some stage so that the owner of the grain can find out all the circumstances. We have already had such cases when the supplier saw that there were problems with the weight of the cargo. As a result, it turned out that in the process of delivering products to the elevator, part of the grain was dumped from it.”

All information about the depositor’s grain remains in the electronic cloud. Farmers can return to information, for example, two months ago and, in case of controversial issues, look at the data on a particular car.

The next step in the implementation of this program will be the creation of many chat bots in any messengers through which the farmer generates a request and quickly receives the information he needs. For example, he will be able to see the remainder of his grain in the elevator, and for this he will not need to call the accountant.

The company remains in touch with the client 24/7, while managing requests and automating service regulations, following the business processes laid down in the system. Thus, the farmer can control the entire process from the acceptance of the goods for storage to the sale in real time.

“I’ll give you one more example. When we buy grain from a local farmer, the manager enters cargo data through a mobile application in this system, they are sent to the accountant of our company, she draws up the primary documentation and sends it online to the farmer’s accountant. Previously, this whole procedure of communication between two accountants took several hours, now – a couple of minutes. We have automated the routine processes of the sales department and have become closer to our partners.”

How is the security of access to information in the system ensured? Each user who works in the CRM system of the G.R. Agro company is registered at the start. This happens either at the conclusion of an agreement, for example, on the supply of grain, or a storage agreement, and so on. The person is authenticated, that is, the authenticity of the identifier presented by the user is verified.

“We know that this user is a specific person, he registers on his phone number, under his password, only he knows this password and no search will give it.”

Each client can only see information about their cars and their grain. The client has no access to third-party data. All information is located on the rented server of our company.

“The cloud storage company guarantees the security and confidentiality of the data of the users of the system.”

System development
As already mentioned, the first stage of implementing a CRM system in G.R. Agro is to establish interaction between the company’s elevators and farmers.

Further, the circle of participants in this system in the company will expand.

“The idea is to organize some kind of information field for agricultural producers and participants in the procurement market, that is, traders and processors, and so on. This will not be a marketplace. It’s just that traders, being in this system, will see that, for example, 10 thousand tons of wheat are available for sale at such and such an elevator – 5 thousand tons from agricultural producers, and 5 thousand tons from another trader, and so on. This will allow us to be more open and faster to sell products at favorable prices”.

The second stage of implementation of this program is planned for next season.

G.R. Agro is considering 6 areas to expand its elevator network

all at once
news
prices